It's a midweek evening and I don't want a full 45% of my sugar intake (I eat too much chocolate as it is and I'm cutting that down!). What to do? Enter this sugar-free Virgil's Zero root beer.

I quite liked the full sugar root beer from Virgil's and at the first gulp the flavours of this sugar-free brew were almost identical. But it was too good to be true with the distinctive diet after-taste disappointment. It was like all big brass build-up then a quiet, rapy gasp of nothing.

Personally I don't see the point. At this price for any root beer it's more like a treat every so often so taking away the best bit renders this pointless. Anyone on a diet who loves root beer should just drink a normal one every month and double up the jogging.

Bought orginally from American Fizz at £1.49 for a 355ml bottle.

I rate this caffiene and sugar-free root beer: 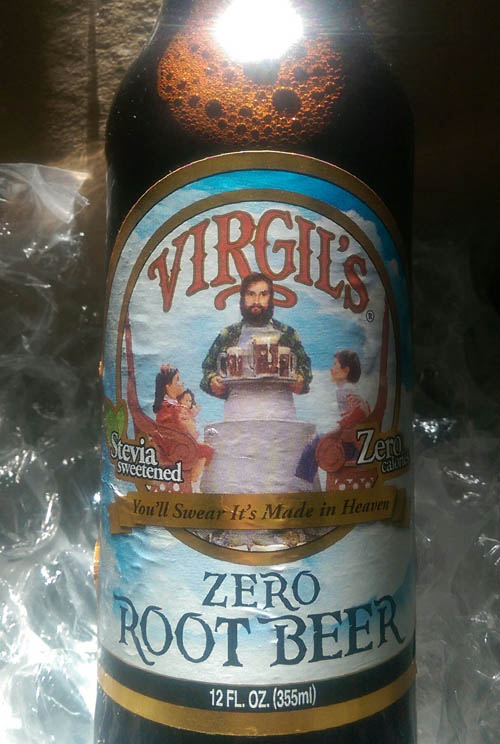 Here it is. This is the Christmas goose of the root beer world. The biggest, possibly the coolest root beer bottle on the market. At £2.59 for a 500ml bottle its either a personal luxury treat or someone else's birthday or Christmas present.

This is a lot better than the regular flavour root beer from Virgil's. Not sure I'm getting any nutmeg though. Leave it your mouth for a while and the flavours change a little bit but there's no expected nuttiness. According to the Virgil's website the ingredients read like a luxury holiday around the world and have more airmiles than Alan Whicker.

Personally I give it 8/10 but would have given it 9 if the value for money was better. Bought originally from American Fizz. 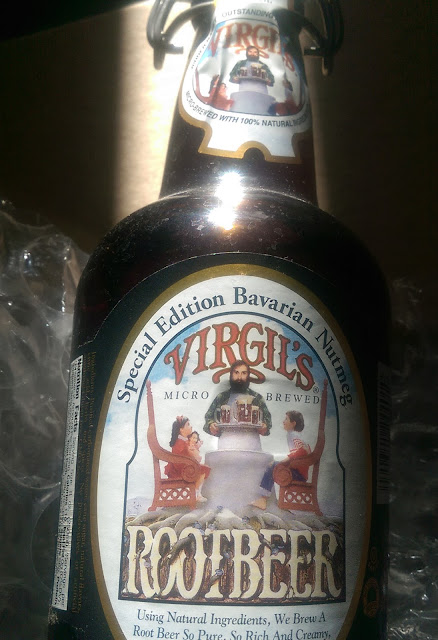 Email ThisBlogThis!Share to TwitterShare to FacebookShare to Pinterest
Labels: 8/10

It's basically a Dr. Pepper drink, end of. Compared to the mass produced Dr. Pepper this Virgil's Doctor Better drink is a bit smoother but none the less has the same odd taste. I realise this sounds weird especially with root beer being a specialist taste. If you're a fan then get in there, it's probably the best Doctor drink you can get.

In case you were wondering where the 'doctor' drink concept came from then you have to go way back when these type of drinks were marketed as a brain tonic and energizing pick-me-up. Available only in chemists in the US around the late 1880s.

If you love Battenberg cake then you'll love this with a smooth marzipan taste. There's no caffeine and contains all natural ingredients so none of that nasty high fructose corn syrup. Available from American Sweets for £1.49 a 355ml bottle.

There's plenty of US-based soft drinks reviewers out there including this guy - Soda Tasting who rates it as much as I do:


I rate this personally: 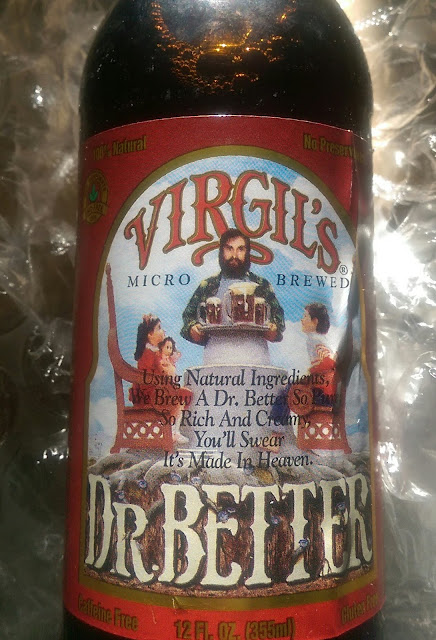 After a few months of root beer abstinence due to giving up on finding any decent imports, the Soda Folk root beer success gave me some confidence in the UK market. I've since rediscovered that American Fizz is stocking a few root beers I've yet to review. Last time I ordered from this Bournemouth-based shop was the Virgil's root beer which passes the EU sodium benzoate ingredient test. I rated it 8/10.

This Hansen's root beer is Germolene on the extreme. Not too sweet but not as creamy as proudly displayed and stated on the 355ml can. Ingredients say there's Tahitian vanilla extract, wintergreen, birch, anise, sassafras as well as a lot of sugar. Luckily the sugar doesn't give you that tooth melting sensation and would say the birch taste takes over. If your freinds thought root beer tasted weird then be prepared to feel even more outcasted with this flavour. Don't be fooled by the the vanilla flavour - it comes in like a ninja, thinking you get a glimpse of it at the start but it's fleeting and disguised.

If like me, if you hadn't heard of Tahitian vanilla but more used to seeing Madagascan vanilla in your ingredients listings then let me enlighten you with this new knowledge!

Taken from Huffington Post:
"Tahitian vanilla comes from the island of Tahiti, part of the French Polynesia. It's sweet and fruity and has less natural vanillin (that distinctive vanilla taste) than Bourbon and Mexican vanilla. This bean has a more cherry-like, floral, licorice taste. The Tahitian vanilla pod is fatter and moister than Bourbon vanilla, and contains fewer seeds inside its pod. It tends to be deeper in color than vanilla from Mexico and Madagascar, but the flavor is more subtle. It's nuanced and unique taste make it a great choice for dishes that use vanilla as its main flavor profile."

This explains the limited vanilla flavouring with this Hansen's root beer. However, if you want a caffiene-free, vanilla-flavour free root beer for £1.09 a can then this is for you! The price is the same as paying for the likes of A & W, Barq's and MUG. I rate ths: 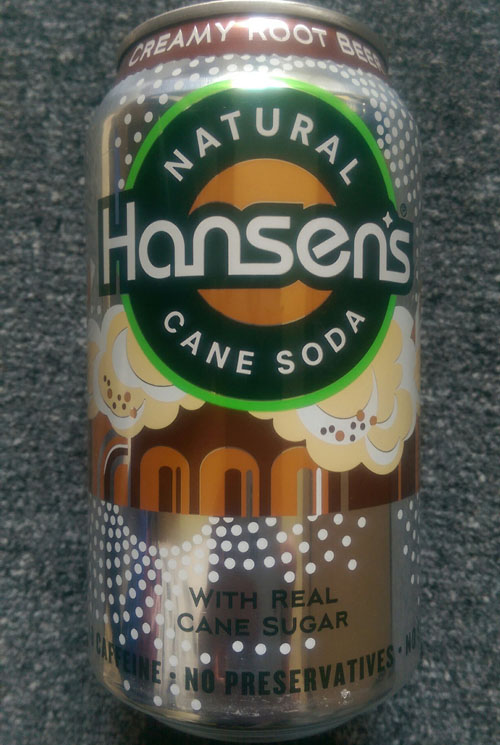 I never thought I'd see another British brewed root beer after the whole EU ban on sodium benzoate affair. I thought the home market would give up their love affair for US germolene tasting weirdness and resort to colas and other fizzy drink brands. Yet only in the space of a few weeks another British-made root beer brand comes along to stick two fingers up at the regulators and provide us fans a true taste of America.

I'm really happy to say we have another A & W root beer beater with only Dominion being the best available in the UK so far. Is it better than Dominion? Well, that might just be down to personal taste but to me there rate about the same to me.

I love the quirky branding design with the lumberjack character. Soda Folk also offer a Cream Soda drink using a boxer (which I'll review later). Would love to have been at their marketing and design meeting to discuss chosing these characters.

Soda Folk themselves have a great background story. USA born Ken Graham moved to London in 2012 and soon missed his favourite soft drinks. Having grown up with many local brands (and even foraging ingredients to brew his own root beer as a kid), Ken knew his onions when it came to root beer and its distinct taste (note: the root beer doesn't taste of onions).

The Soda Folk root beer ingredients really stand out in the taste test. The wintergreen taste is natural and strong, there's a hint of vanilla but its the maple syrup taste that kicks in the tastebuds to complete the experience.

There's a good price to match as well. This 330ml can costs £1.25 from American Sweets (The Stateside Candy Co.) and there's also a 335ml bottle for £1.25 direct from Soda Folk but you'll need to order 12 and pay £5 postage). You may also be lucky to find this root beer in Selfridges and Byron Burger restaurants as well as some independent sweet shops including Tony's Sweet Shop located in Exeter (credit due for telling me about Soda Folk). 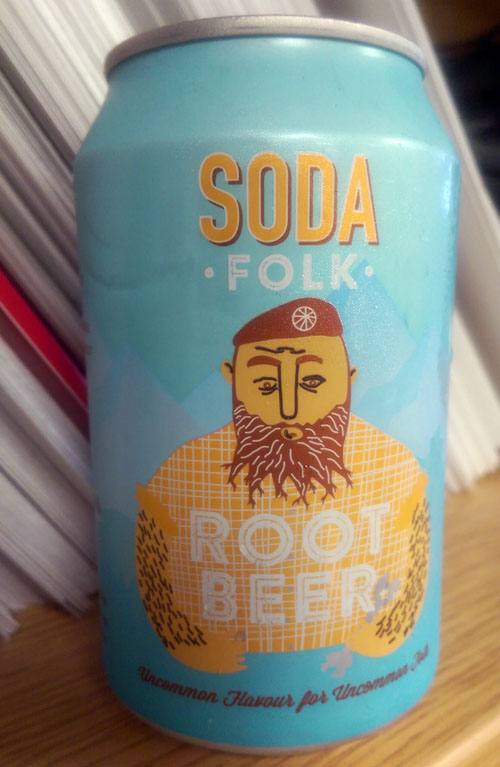 The current UK root market is a little like the sports world. With many being banned for illegal enhancing ingredients, the remaining field has dwindled to only a handful. Stepping up to the challenge is a UK brewed root beer by the name of Square Root from London.

We British love an underdog and from the label and price this one appears to be a classy, well-bred character. Let's call this the Tim Henman of root beer. Lots of fans (back in the day) but ultimately up against the American class it won't win anything major.

First impressions were good, an interesting mixture of flavours. Tasting a little more like honey with a mild impression of the burdock and liquorice hints coming through, you could almost get the impression it was a health drink. After that though most of the subtle flavours disappears which is quite strange. At £2.70 a bottle it is very expensive but with the amount of choice out there it's worth a go. If we don't support these home-grown (home-brewed?) root beers then we risk losing it all through lack of demand.


Many thanks to Cyber Candy for sending me this root beer. They also sell Dominion root beer which is a more traditional American root beer taste and one I would strongly recommend.

Email ThisBlogThis!Share to TwitterShare to FacebookShare to Pinterest
Labels: 7/10

If you're new to this blog or even new to root beer then you won't know that the UK and EU have got tough on imports of food and drinks containing sodium benzoate meaning a ban of a lot of US root beers. Some traders have reported being threatened with fines for selling root beers due to this change in law so this should present an opportunity for UK brewers and manufacturers to create and sell their own.

One UK brewer I've come across is Septimus Sypder who look to have grown from selling at village fetes and country fairs to giving online trading a go. Their website is, how can I say, unique with character. Possibly its been brewed in a cauldron with eye of newt and a Windows 3.1 computer.

The actual drink must have been brewed in a similar way. As soon as the bottle was opened the smell was questionable like a sickly caramel/chocolate smell. My wife described it as the smell of used bandages. The taste was slightly better but not by much. There wasn't any root beer flavouring at all but a very watery caramel taste. There's definitely sugar as it was quite sweet with my enamel buzzing after a few gulps. Worst of all there was no carbonation at all even though the label said there would a little. I didn't notice any alcoholic effects but I doubt 0.5% would really do anything.

When I emailed them to say how flat and off-tasting it was they confirmed that this was how it should be. Any good business should take on customer feedback and consider adapting recipe. I'll assume that Cyber Candy will have bought a batch of this as an attempt to replace their previous vast selection of US root beers. Unfortunately, at the very high price of £3.45 a bottle and awful taste I only see warlocks and hobgoblins enjoying this brew at their local medieval event.

I hope for their sake that the other types of drinks like Ginger Beer, Cream Soda and Dandelion & Burdock are a lot better but I won't be reviewing them here.

At risk of getting a curse from this alchemist I give this: 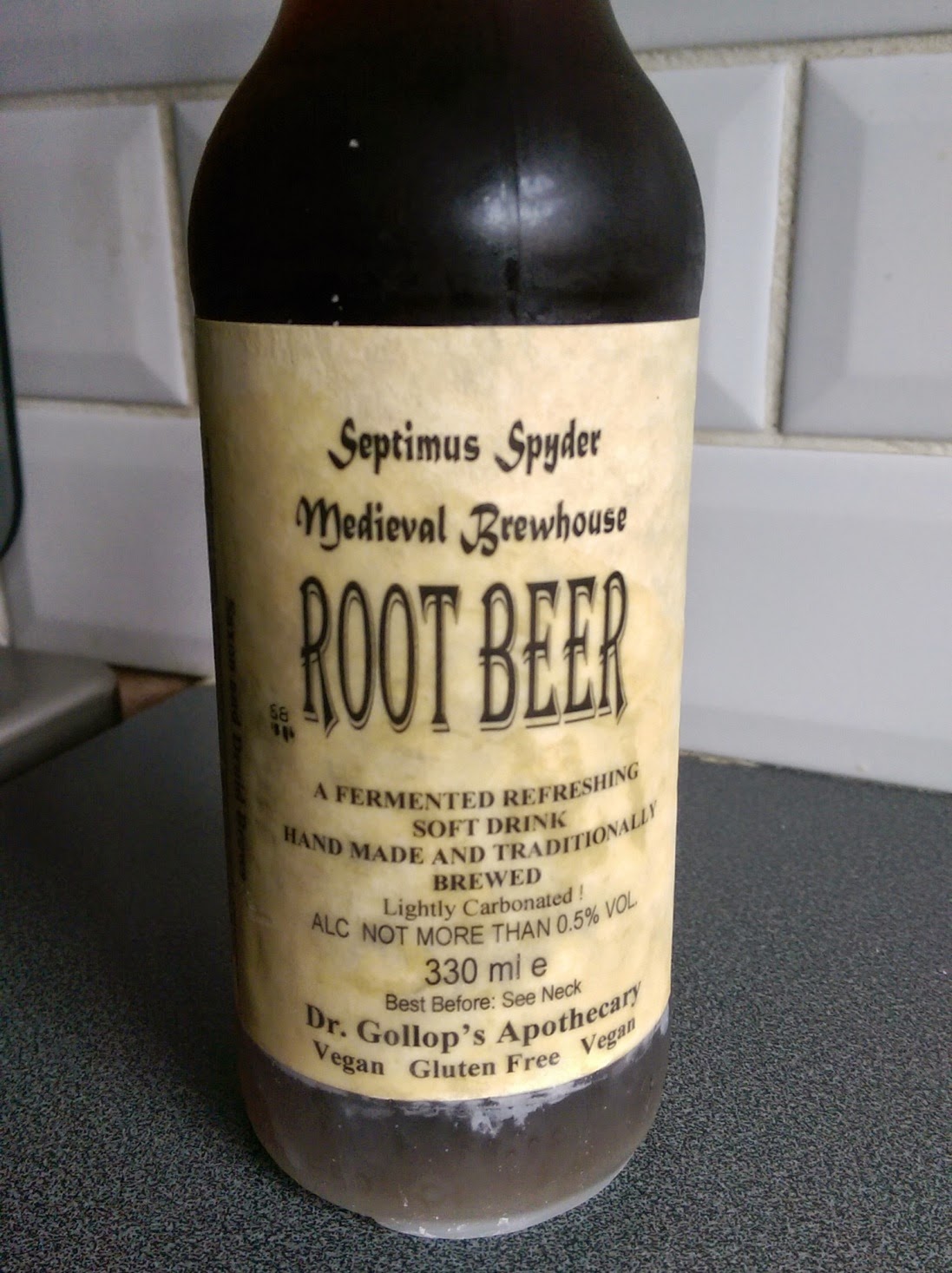 Get the latest updates on your preferred social media channel here:

Filter by score or flavour